As a young boy Tony Stockwell knew he was different from other children.

From an early age it was common for him to hear his name being called by someone unseen and for him to be aware of events before they actually happened.

When he was 16 he was invited by a friend to attend a spiritualist church which would start him on his journey to becoming one of the country’s most well-known psychic mediums.

Since then the father of two has strived to demonstrate his mediumistic ability, endeavouring to reunite relatives with their departed loved ones and on February 4 will be returning to Telford’s Oakengates Theatre.

On the night he will demonstrate his belief that those who have passed can communicate with their loved ones with detailed messages frequently including names, dates and locations delivered with emotion, sensitivity and empathy.

“If you can bless one person’s life to absolutely believe beyond doubt that their mum, their dad, their son, or their daughter is actually going to be there waiting for them and it gives them comfort, then that’s worth doing,” says the 51-year-old, who grew up in London’s East End.

He has spent 25 years working as a medium and as well as hosting events, he regularly teaches mediumship at the Arthur Findlay College and the College of Psychic Studies in London.

“It was never a case of me wanting to perform, and it was certainly never my need to work in theatres or on television, as I am actually quite shy. I wanted to communicate with spirits and the rest just took its own path.

“From the moment I started to develop my gift, it was as natural to me as eating and breathing. When you are able to pass on a message to a person or family that has lost a loved one there really is no going back, as the feeling of what has happened is immense,” says Tony.

“My life is dedicated to something I absolutely love and absolutely believe in. It’s so gratifying when you see the change the work of a medium can have on some people. It’s a privilege to help them come to terms with their loss,” he adds.

Over the years there have been many memorable moments and people he has helped that have stuck in his memory.

“Recently I was going through old emails from a while back. A lady had written to thank me for the one-to-one reading I did for her.

“I remembered it well, because she sat there and I told her about a lady in the spirit world who was 37. She didn’t say yes or no. When I read for someone, I’m often in an altered state.

“My eyes are open and I’m talking, but I very rarely look at my client. I carried on for this lady, and I saw very tall windows in a space that felt like a hospital, but wasn’t. I knew the spirit woman had been heavily depressed.

“I knew she’d hung herself from the window, but I was still getting no response from my client. But I was so convinced I needed to follow this through, so I looked at her and asked if she knew this lady. She said it was her sister-in-law.

“So I went through all the information again, and what the client gave me in her energy was not just ‘yes but ‘oh my god’. And that relief lifts your mediumship higher.

“Then I saw the word ‘Michelle’; I said this, and the client was so surprised that she was quite colourful with her language, saying ‘Oh my, that’s her name!

“And I thought to myself – ‘My God, how brilliant is that!’,” recalls Tony, who has had several of his own televisions series including Psychic Academy, The Psychic Detective and Street Psychic.

Even after so long working as a medium, he says he’s never been scared by anything that’s happened during a reading.

“There are a lot of misconceptions surrounding mediumship but to me it’s all very natural and safe. It’s just a part of who I am and what I do.

“Readings are orchestrated by a love connection between the living and those in spirit, so there is nothing to be scared of.

“To the contrary it’s a lovely feeling to be part of that reunion,” says.

He says people who don’t believe in mediumship are as entitled to their opinions and beliefs as those that do believe but he always asks the audience to keep an open mind.

“There is a difference between those that are sceptical and those that are open minded but sitting on the fence, as the latter will enquire and will often come along to a show.

“Some will go away convinced and some will not, that’s just how it is. For the hardened sceptic no proof will ever be enough and they will always find a way to explain away what they have witnessed.

“That’s fine with me as that’s their path in life and this is mine, but I have the pleasure in knowing they will one day find out the truth about life after death, but in the meantime them being sceptical is fine with me,” says Tony, who has performed alongside the likes of Colin Fry and Derek Acorah,

“If people haven’t seen a medium work before, come along with an open mind, you may be surprised. The phenomenon of mediumship is a powerful thing and has the ability to change lives, so why not give it the benefit of doubt?,” he adds. 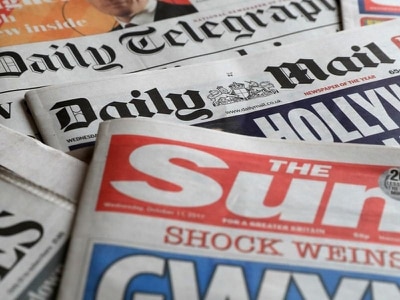 What the papers say – February 26