More than 83,000 crimes were reported to West Mercia Police last year, an increase of five per cent.

The latest crime figures show a total of 88,384 offences were recorded in the year to September 2018.

The year-on-year increase is in line with a national increase, also of five per cent, but masks big variations between the different types of crime.

While theft offences across the region saw a three per cent fall, there were marked increases in violent and drug-related crime.

The biggest percentage increase was in harassment and stalking offences, which increased by 31 per cent to 9,488.

The number of burglaries fell seven per cent to 7,171, doing better than the national fall of four per cent, and the fall in residential burglaries was even bigger, dropping by 12 per cent.

Shoplifting was up by three per cent, with 7,949 offences committed, compared to a three per cent fall nationally. Over the border in Dyfed-Powys, 31,727 crimes were reported in 2019, an 11 per cent increase on 2018.

Violent crime rose by 27 per cent, more than double the rise for England and Wales, with 28,658 offences recorded in the force area.

Stalking and harassment saw a 51 per cent increase in Dyfed-Powys, with 3,914 cases recorded,

There was also a 48 per cent increase in the number people carrying offensive weapons in Dyfed-Powys, with 240 cases recorded.

Drugs offences in the force area were up by eight per cent to 2,058.

West Mercia Police and Crime Commissioner John Campion said: “I am encouraged that, following proactive work, burglary is on a continued downward trend across West Mercia.

“However it is clear that more can and needs to be done to address other aspects of crime that are still blighting communities – particularly crime of a violent nature.”

Mr Campion said fighting crime would always be at the centre of his work as commissioner.

“I will continue to hold the force to account and ensure our communities not only are safe, but feel safe," he said.

"We are conscious of the effect crimes such as burglary has on victims and have introduced a campaign called We Don’t Buy Crime - our aim is to put criminals out of business and make the counties covered by West Mercia Police as undesirable as possible for them to come and commit crime.

“The area we cover is some of the safest in the country but we are not complacent and we continue to address some of the areas where increases in crime have been seen."

Mr Evans said over the past few years the force had carried out a lot of work to tackle knife crime.

"Last year we introduced the successful Steer Clear programme in Telford to identify and support young people, and their families, on the periphery of becoming involved in knife crime," he said.

“We know there has been a rise in the number of people found to be in possession of a knife and this is down to our proactive intelligence-led work to make sure we take action against those people who are carrying a knife.

"We actively encourage people to come forward and report knife related offences, in particular if anyone has concerns someone they know is carrying a knife then we want to hear from them.” 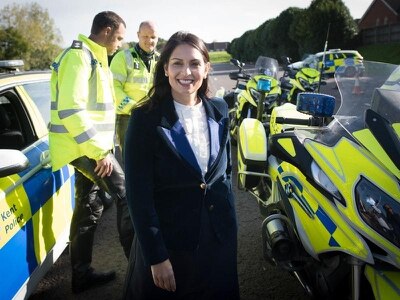