Archaeologists get digging at Shrewsbury Castle - with video and pictures

Another piece of Shrewsbury Castle's rich history is gradually being uncovered as archaeologists get to work on the first ever dig at the castle's inner bailey. 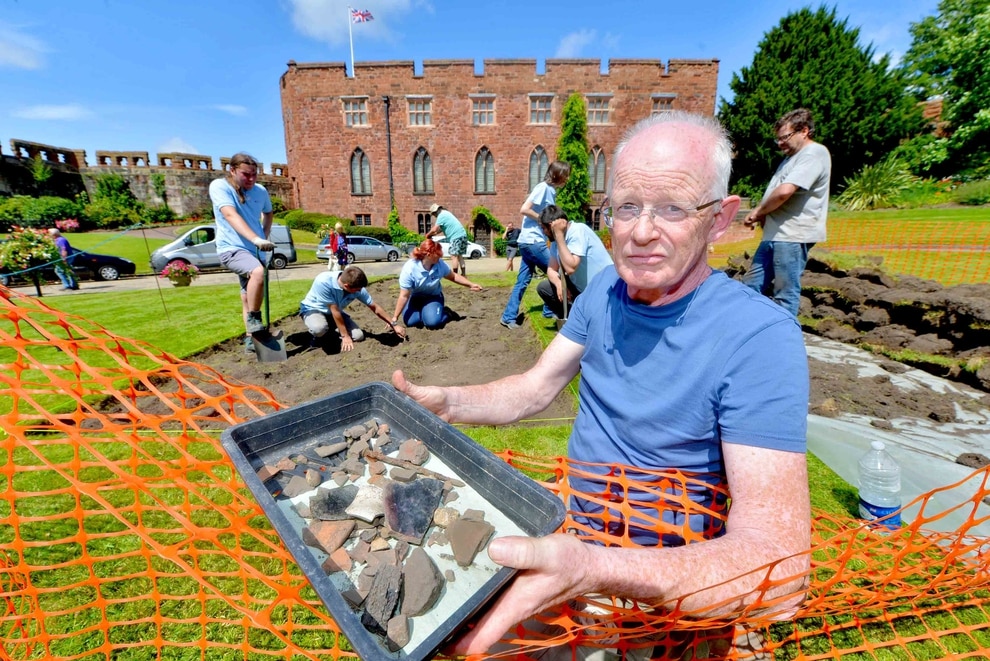 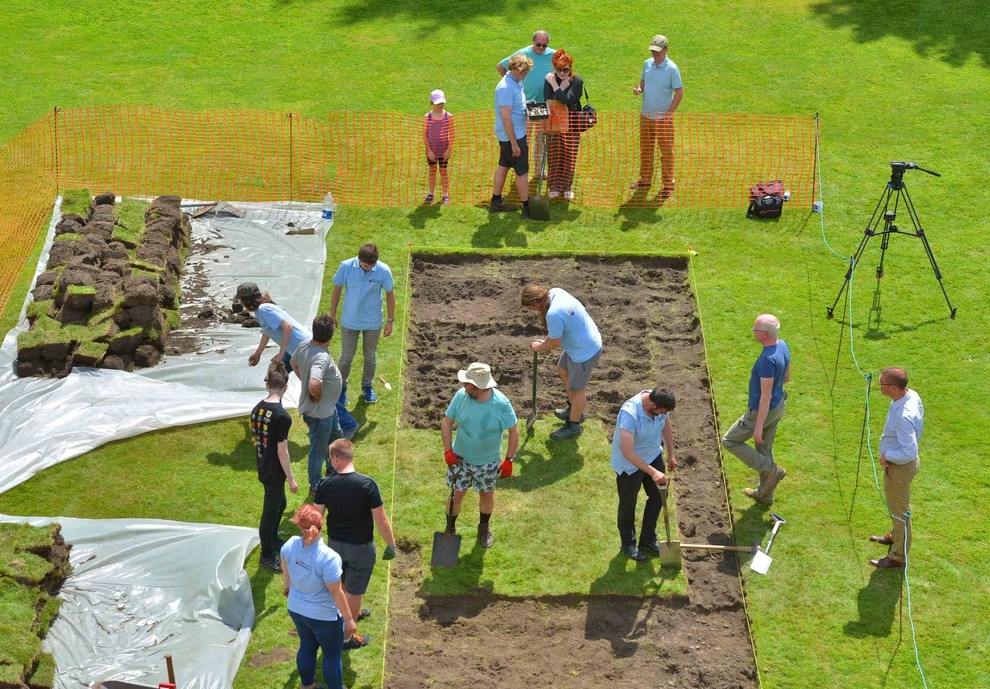 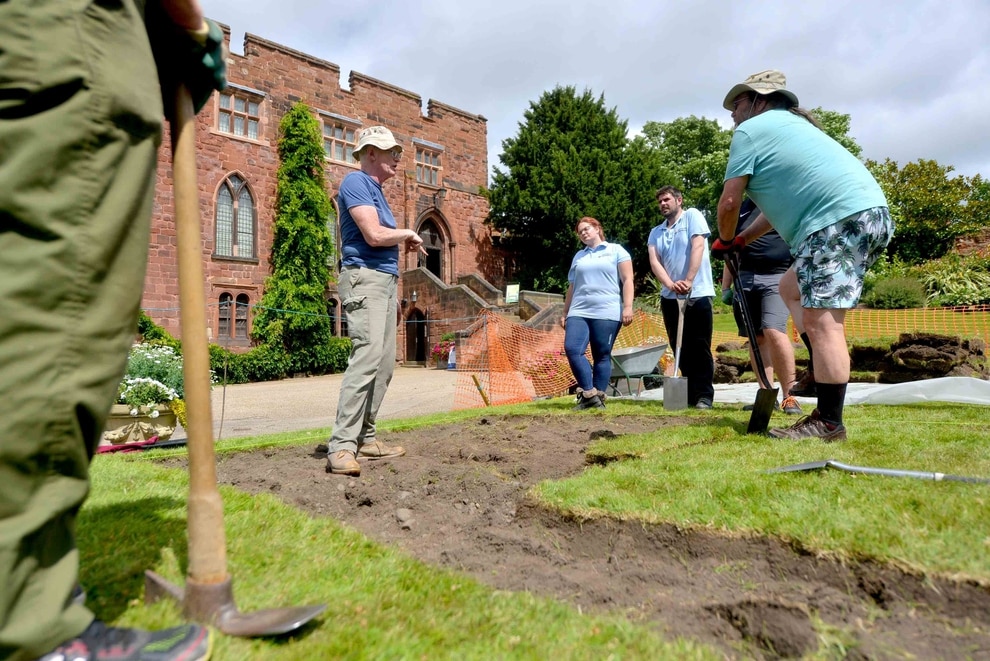 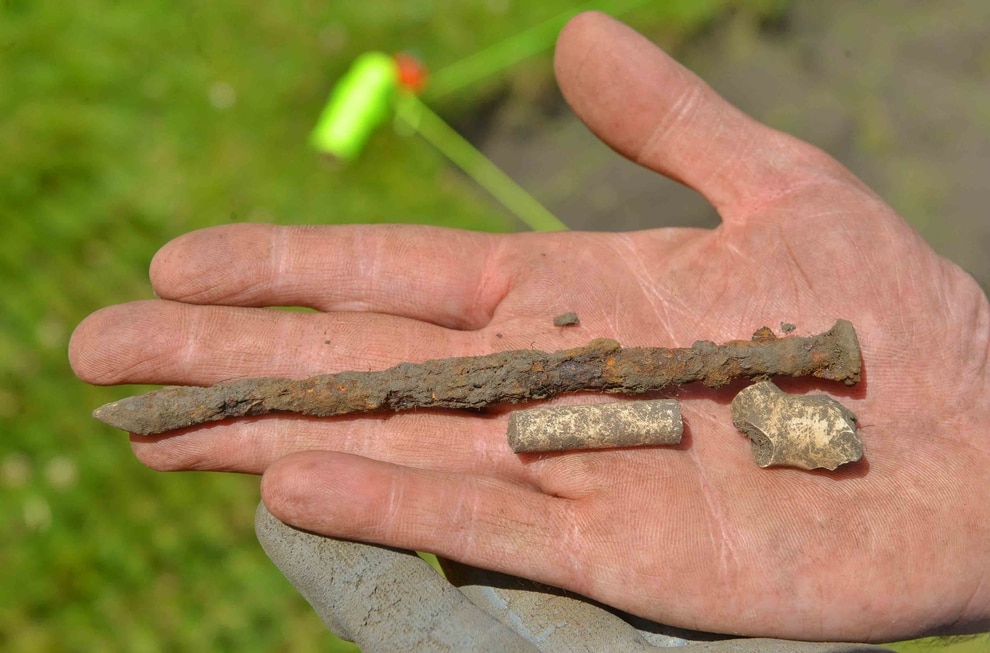 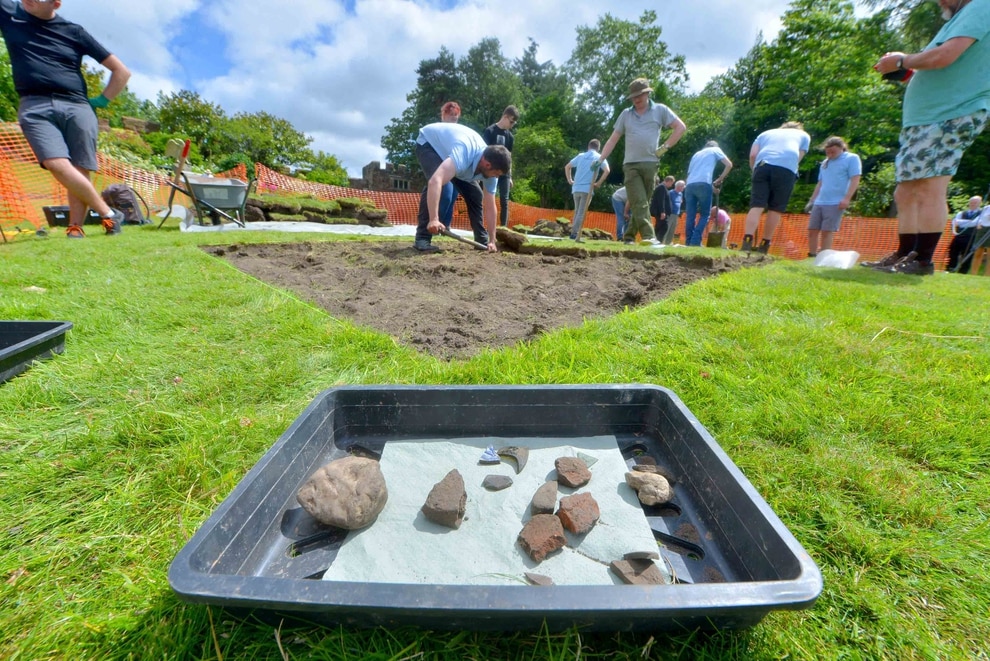 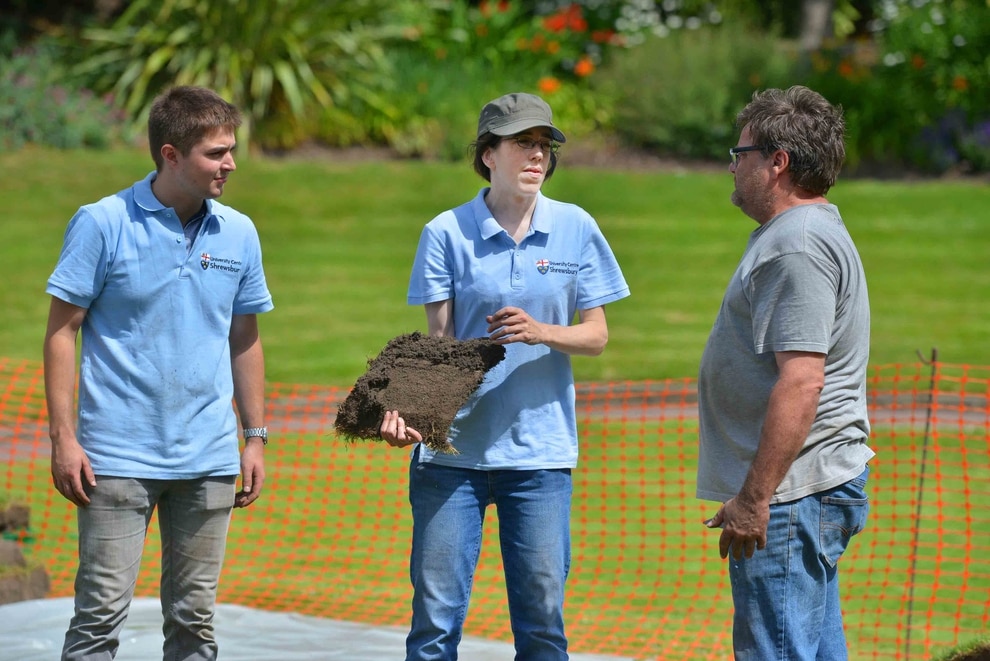 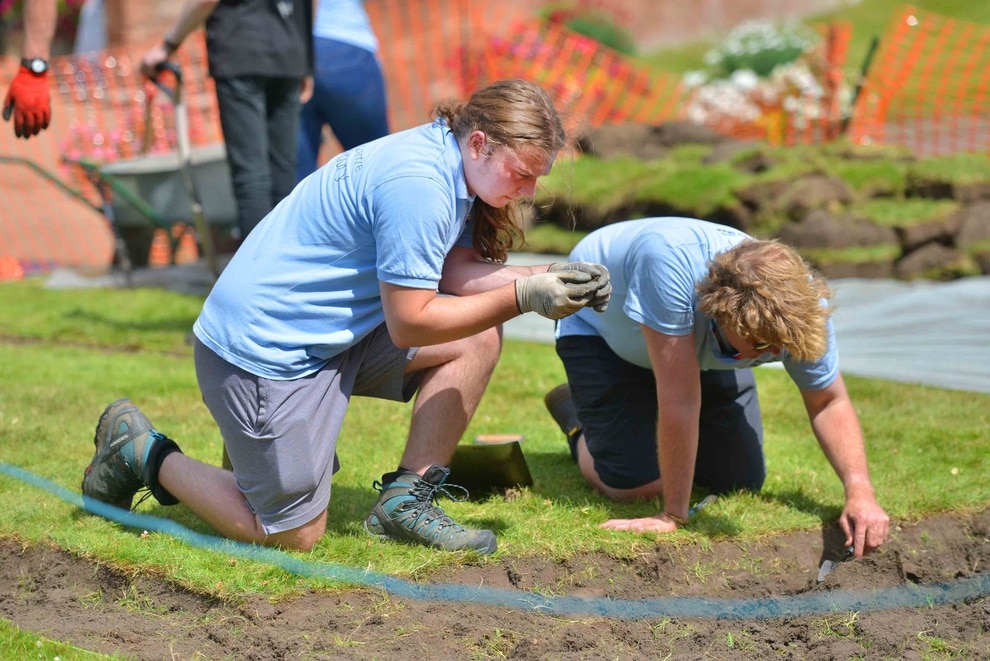 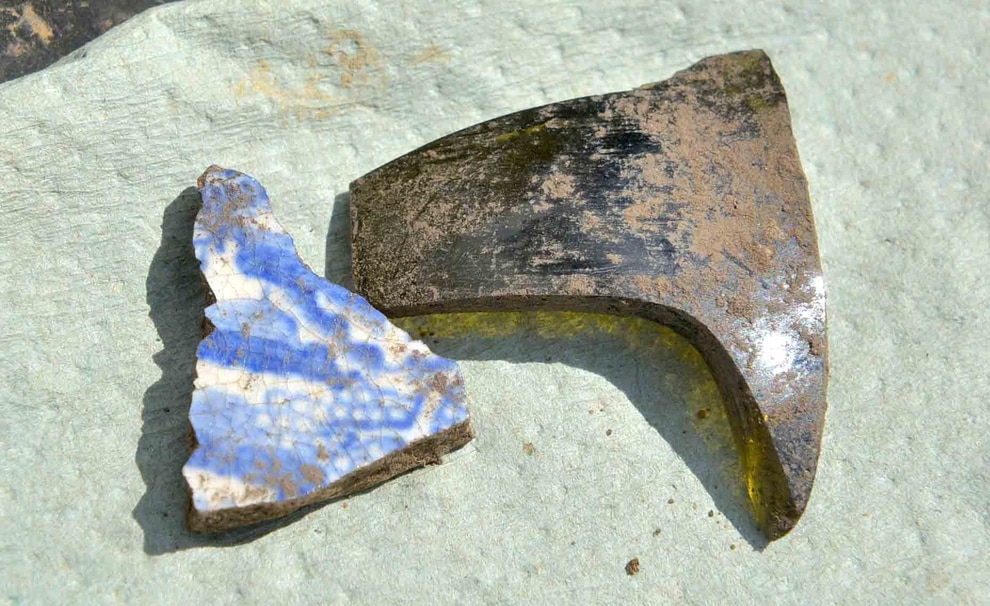 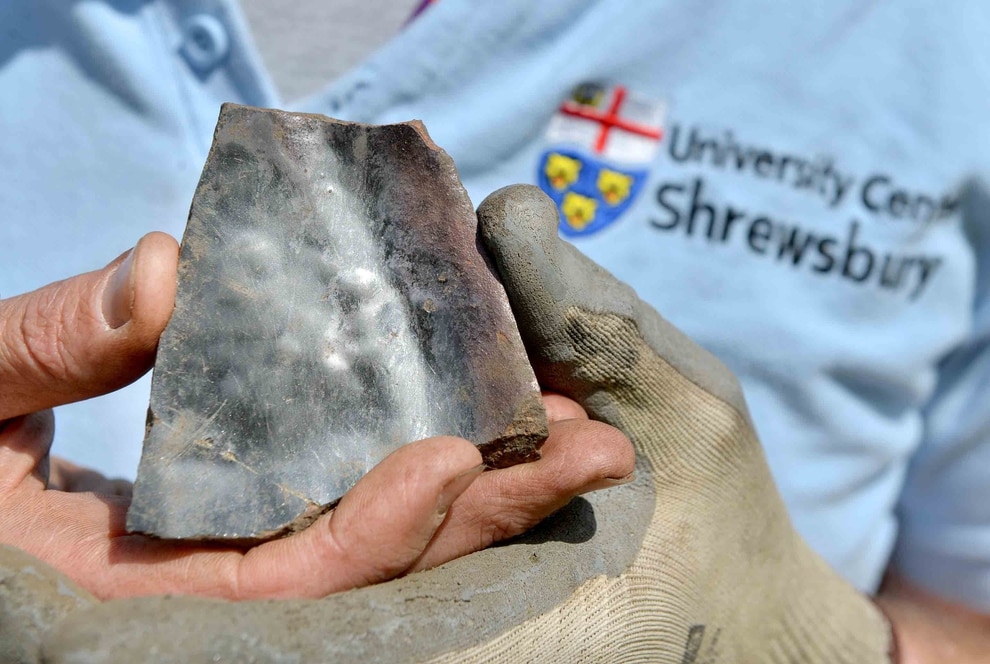 As the sun beat down on Monday morning, volunteers led by Dr Nigel Baker were marking out the small rectangle of lawn where they will spend the next two weeks carefully removing the ground.

A geophysical survey earlier this year revealed something resembling walls, rubble and possibly a tower, is buried just inches below the surface, hidden and forgotten for centuries.

As the project got underway yesterday, intrigued onlookers gathered around the cordon to watch as the volunteers broke ground and began the excavation.

Speaking at the site, Dr Baker said: "We are still taking the turf off but even that is interesting because nobody else has ever seen what lies under the grass.

"Although we have only got little patches exposed we have already got a little pebble surface over here and another surface over there.

"The archaeology begins just a spade's depth below the surface.

"It is not just about digging, it's about making sense of the the building and the walls that go all the way around the site."

The focus of the dig is a patch of lawn opposite the entrance to the standing Great Hall which houses the Regimental Museum.

"We have got a very slight mound here," said Dr Baker, gesturing behind him to where volunteers were digging their shovels into the raised patch of grass.

"The ground level drops off and rises up slightly then drops off again. We are finding out what that hump consists of. We know that whatever is down there is hard and full of masonry rubble.

"Nobody has ever looked here before so we don't know what to expect.

"From the excavation of other castles we know that they were quite often packed with buildings. You had not only the lord of the manor and his family living there, but you needed somewhere for horses, somewhere for servants to live, workshops. You would have a small village worth of buildings."

Dr Baker explained the process of the excavation: "We are taking the turf off in breeze block-sized chunks so we can put it all back together neatly – so the gardeners don't kill us!

"We then have this rectangle of bare garden soil, and we trowel it down until stuff begins to appear. We lower the surface slowly, leaving anything it brings out in place so we can record it.

"The most exciting thing would be the great hall of Henry II. We know he came to Shrewsbury and had a lot of work done at St Mary's Church. We know from government records that he spent a lot of money on the castle, we just don't know what on."

The excavation is part of a wider archaeology project funded by the Castle Studies Trust to help better understand the history of Shrewsbury Castle and the stories it holds within its undiscovered archaeology.

"The Trust likes to give grants for the investigation of castles that people don't know much about," said Dr Baker.

"They came about two or three years ago. They saw it is a very well preserved castle, it is a bit of a hidden gem, so they were keen to encourage someone local put together a research project."

As well as Dr Baker, who hails from just outside Shrewsbury, many of the volunteers are locals themselves. Some are National Trust volunteers from Attingham Park, others are students and lectures from historic environment courses at University Centre Shrewsbury.

The dig continues until August 2 and the castle will be open most days (closed August 1) for members of the public to see the excavation in progress and learn more about the project and the castle from the archaeologists themselves.

Dr Baker's report of their findings will be published later this year. 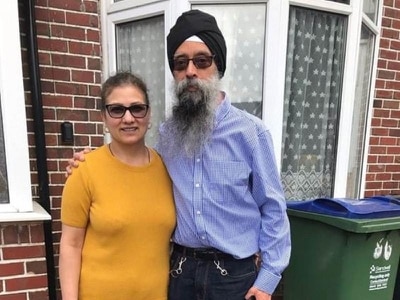