Volunteers respond to call for action: key points from the PM’s update

Here is what you need to know from the Prime Minister’s latest press conference.

Boris Johnson announced that “as many volunteers as the population of Coventry” had responded to his call to help the national coronavirus effort within 24 hours.

Here are the key points from the Prime Minister’s daily press conference on the Covid-19 pandemic.

– Volunteers respond in their thousands

Mr Johnson said 405,000 people have volunteered to help vulnerable people in the coronavirus national effort – within 24 hours of the call being issued.

The Government launched an appeal on Tuesday evening for 250,000 volunteers – but “as many volunteers as the population of Coventry” replied.

Mr Johnson thanked them and the former NHS staff who are returning to work “on behalf of the entire country”.

– Testing programme being ramped up – but problems exist

The PM said the Government was “massively ramping up our testing programmes” and hoped to be conducting 250,000 tests a day “very soon”.

But Professor Chris Whitty, the chief medical officer, said there had been a “global bottleneck” on buying more testing kits.

He told the press conference it was the Government’s aim to be able to buy tests that would allow NHS workers to go back to work if they test negative for coronavirus.

– Help for self-employed is coming

Mr Johnson, who has faced criticism for not providing financial assistance to self-employed workers sooner, said a tailored package would be announced on Thursday.

He said that “never in our history has the Government put its arms around people in the way we are doing now to help them get through this time”.

– Coronavirus to be a ‘close run thing’ for the NHS

Prof Whitty said the Government was expecting the demand for critical care beds to rise in the next fortnight.

Mr Johnson said the Government would look at legal ways of tackling those profiteering by hiking up online prices while the country is in lockdown.

He said he did not want to see people “exploiting people’s need at a critical time” and said the Government was “looking at the legislative framework to see what it may be necessary to do to prevent profiteering just as happened in war time many years ago”. 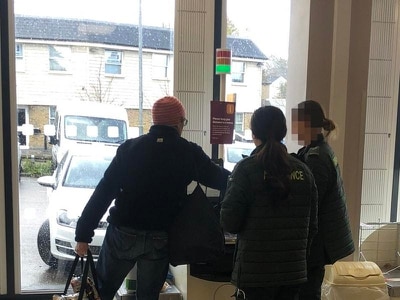