Peter Rhodes on changing times, changing priorities and time to change the rules on online gambling

The good news? Figures released this week show that last year's scorching summer helped make it the best season for butterflies in Britain for 22 years. Enjoy them while you're banged up in your garden with them.

How times change. Only a few weeks ago we thought Phillip Schofield telling the world he was gay was a really big issue.

You might kill a few idle hours today by making a list of subjects that concerned you a few weeks ago that you no longer even think about.

My list of things I no longer give a flying fig about includes: Militant vegans. Militant veggies. Militant Irish politics, Brexit. The Middle East. Internet “influencers.” The future of the TV licence. The future of the BBC. Glastonbury. Eurovision. The difference between free- range and barn-raised. Liz Jones (Sunday Times columnist) being relegated to the second row at a fashion show. Any of Boris Johnson's relatives. Extinction Rebellion. A third runway at Heathrow. Earthquakes anywhere south of Dover.

I do, however, worry about online gambling. It should be banned. With millions of Brits stuck at home 24/7, the old adage “the Devil finds work for idle hands” springs to mind. At the best of times, online gambling is a wicked temptation. Combine it with a captive housebound audience and it's a second pandemic.

A phrase you'll hear a lot is “the new normal.” And how quickly it happens. Two weeks ago we would never have dreamed things would have come to this. But we change, we adapt, we accept the deeply abnormal as normal. As a people we have passed this way before. In 1939, as the Second World War kicked off, Britain changed from being a perfectly rational nation into believing that George Formby was amusing.

In law, we all have a duty of care for each other. Long after Whitehall urged the pubs to close, some bars stayed open and one publican declared he would stay open until he was forced to stop. There will be a reckoning. When this pandemic is over, the lawyers will have a field day.

In the daily Bible of the Left, columnist Will Hutton applauds Rishi Sunak's economic measures, hailing him as “highly intelligent, economically literate, agile and with acutely sensitive political antennae.” So the Guardian is singing the praises of a Tory chancellor. That's how serious things are.

Blame-shifting department. I am buying prudently; you are a panic-buyer. I am storing a sensible amount of food; you are a hoarder. I keep my social-media friends well informed; you are a panic-monger. I am selling Paracetamol at a very reasonable mark-up; you are a vile profiteer. I chat to friends in the park; you break the social-distancing rules. I visit people unannounced as a nice surprise; you are Typhoid Mary. 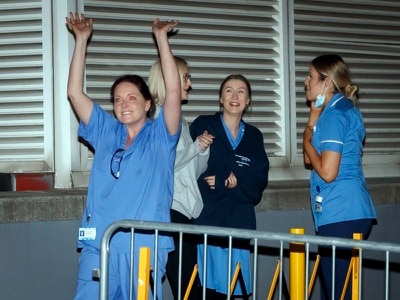