Aston Villa edged to a narrow victory at Shrewsbury as Town fans had a chance to view their new-look side at home for the first time, writes Lewis Cox at Montgomery Waters Meadow. 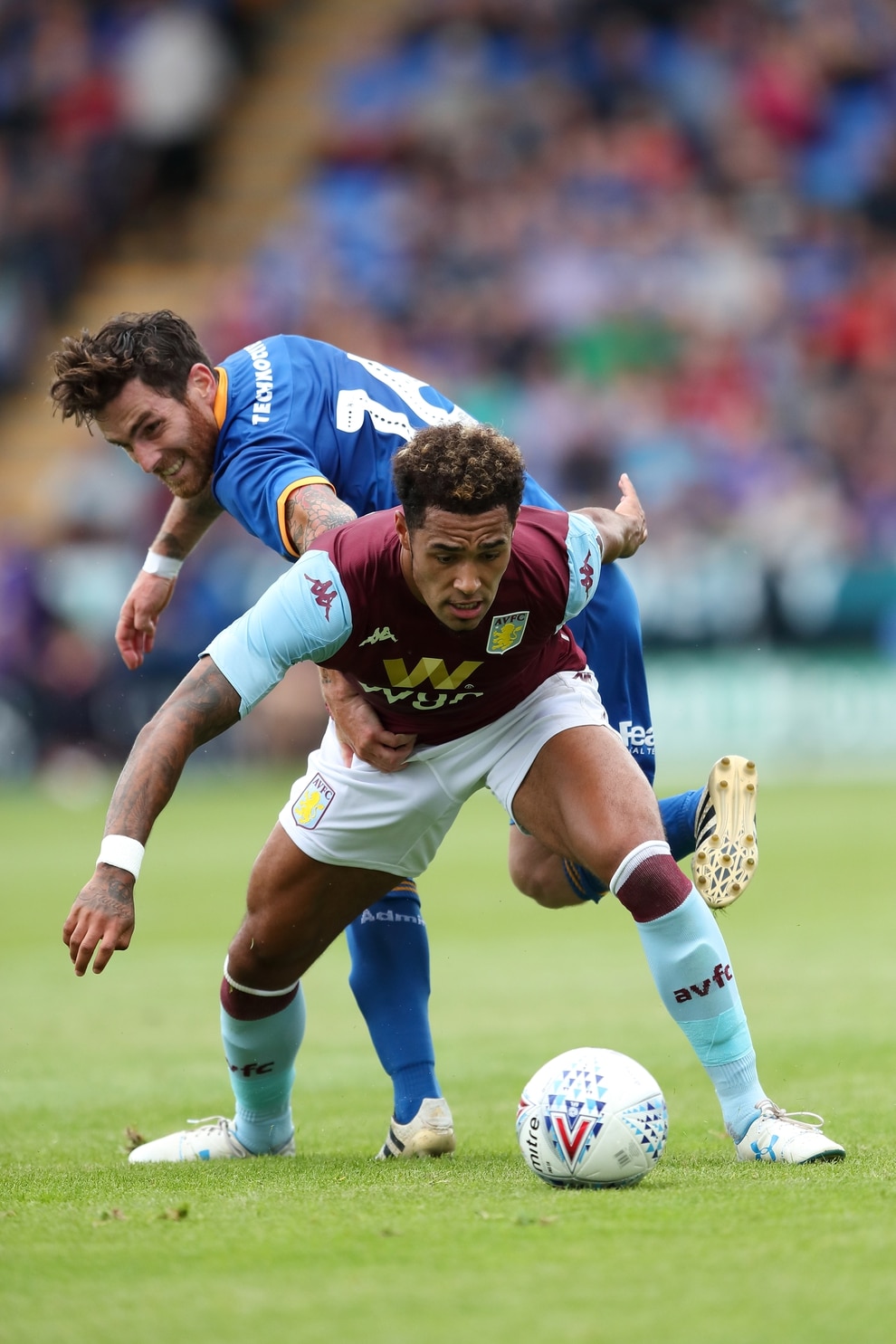 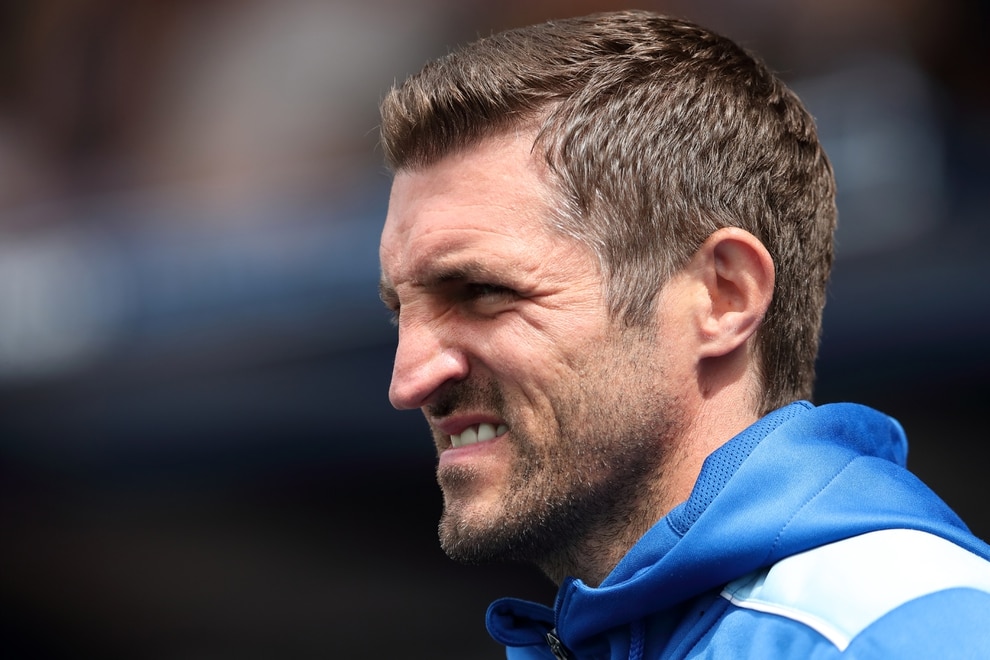 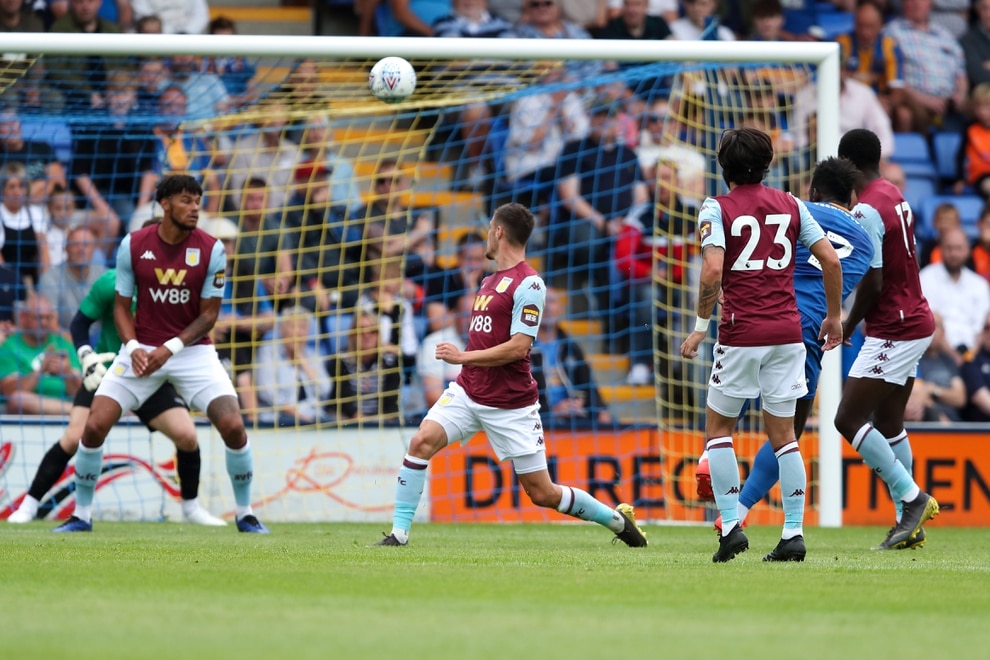 Aaron Pierre of Shrewsbury Town has a shot (AMA) 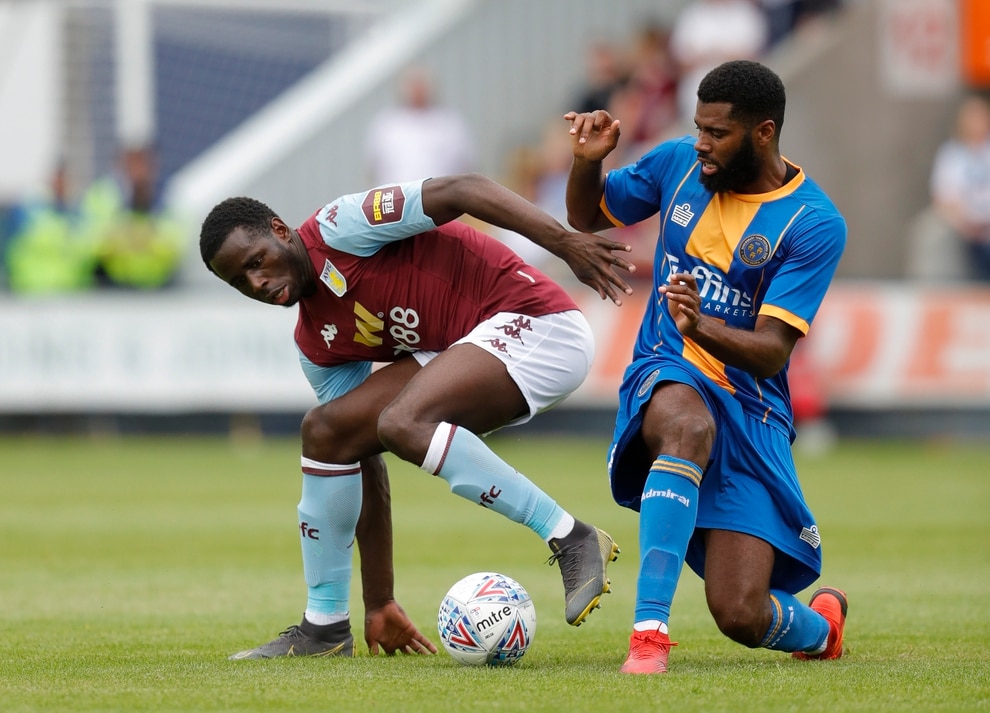 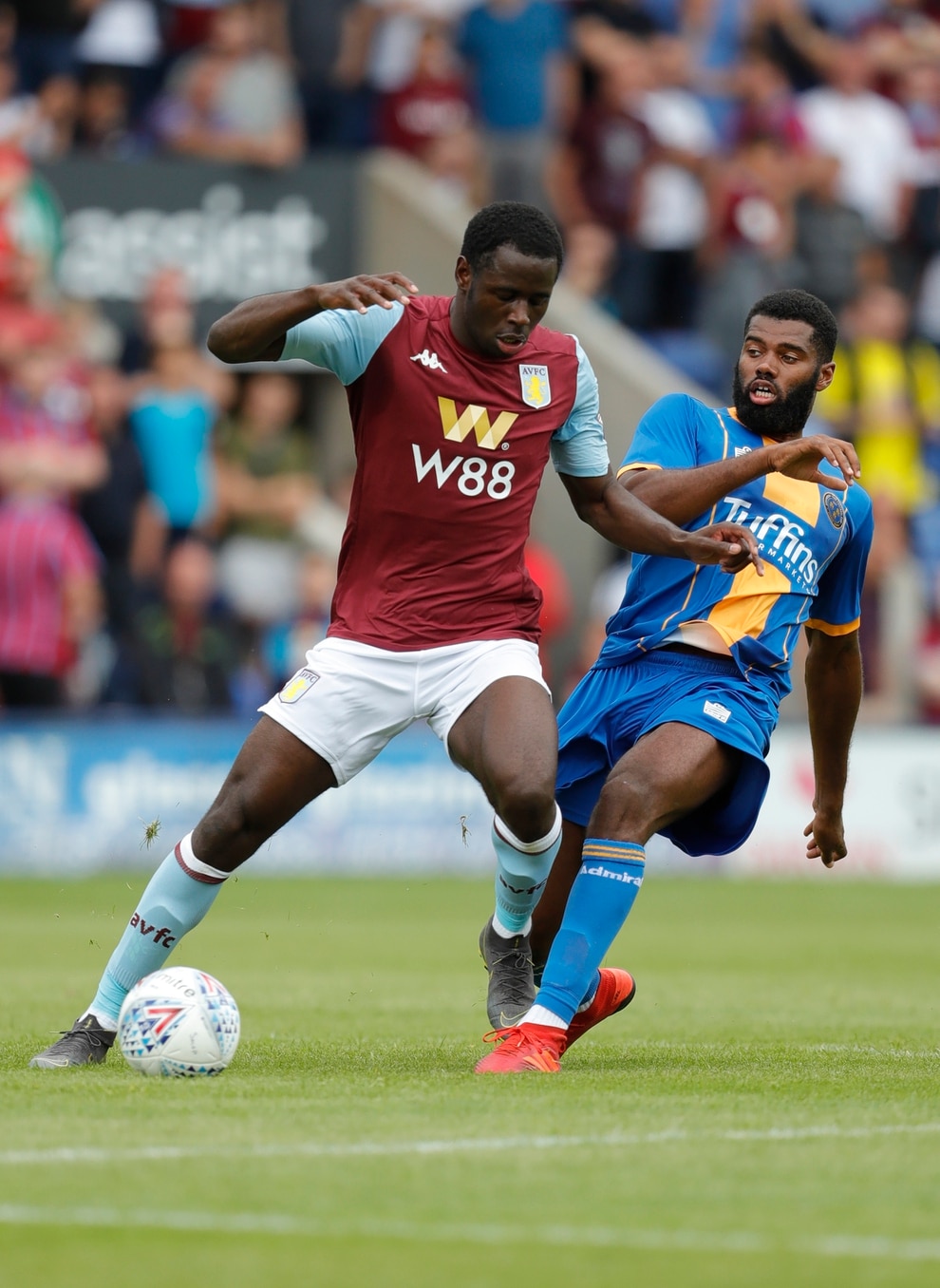 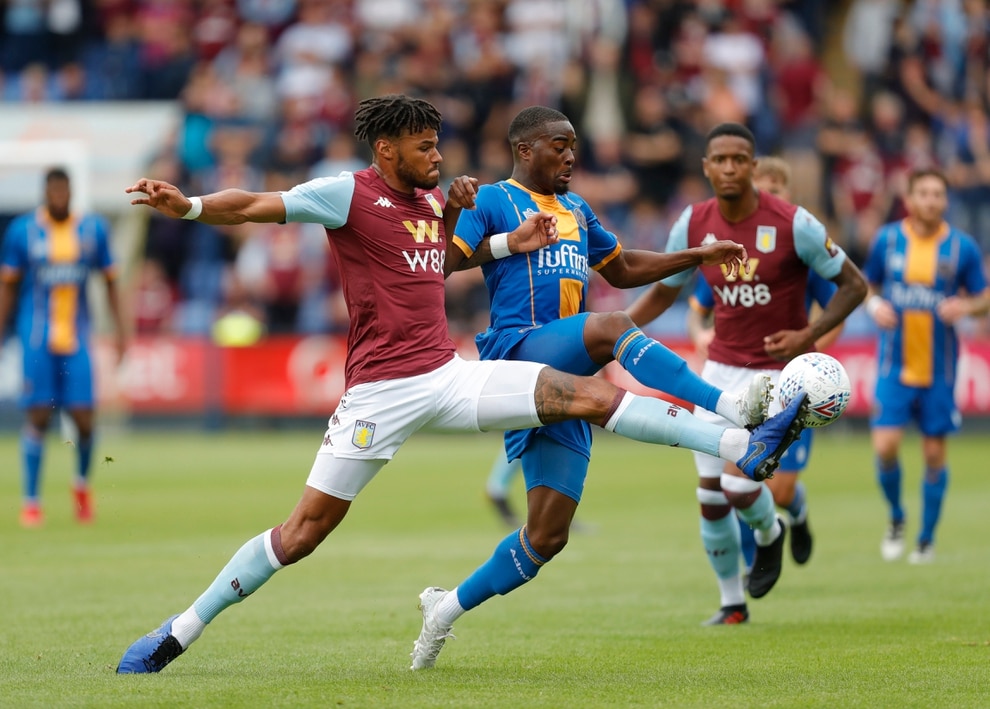 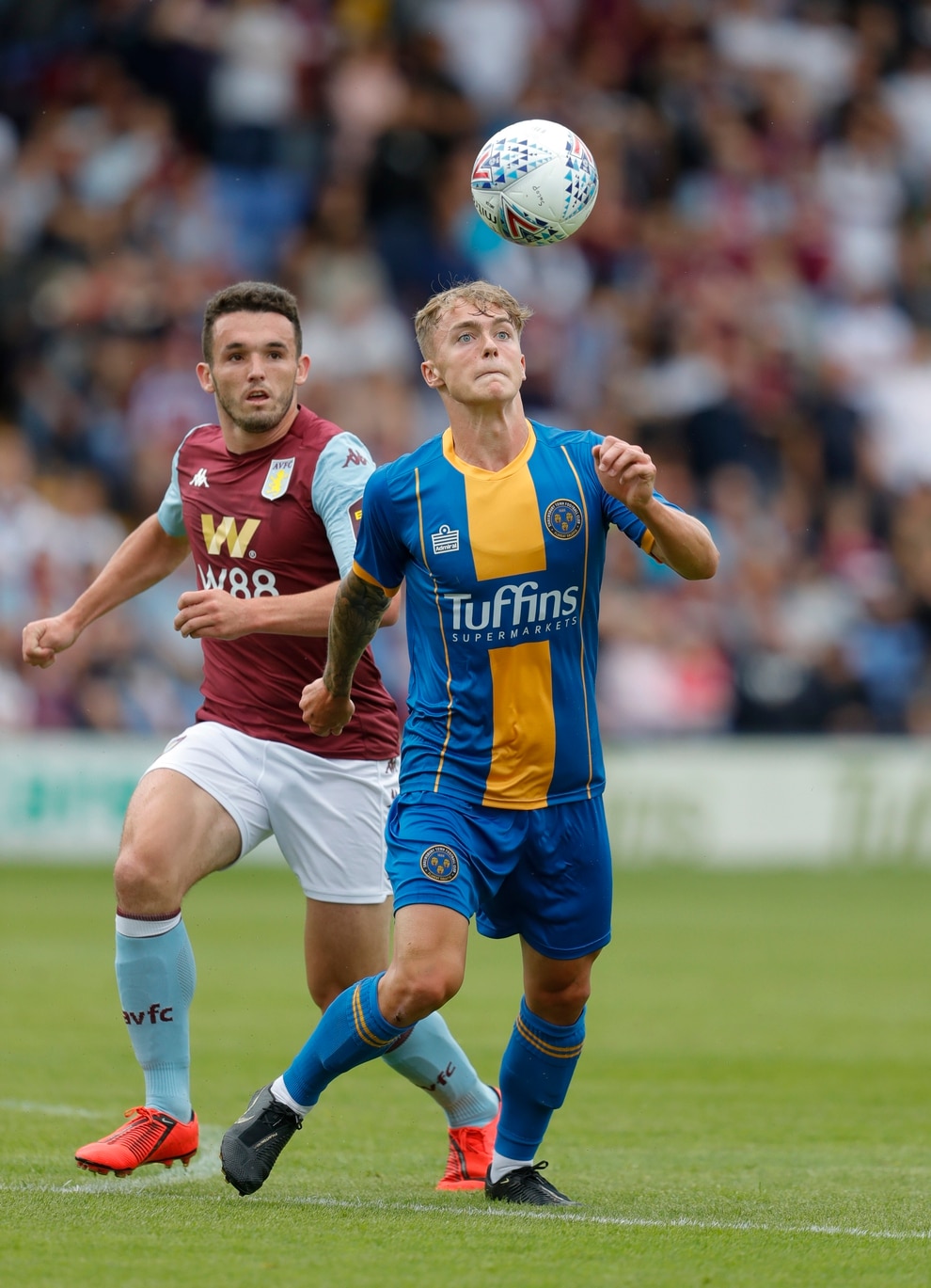 A second-half goal from Villa frontman Scott Hogan was the difference but Sam Ricketts’ hosts caught the eye against their Premier League visitors at a sold-out Meadow.

A competitive first period was largely even, though a strong Villa side saw a lot of the ball. The League One hosts started and finished brightly with decent chances.

Villa fielded a different team after the break and Shrews made almost wholesale changes late on after Hogan’s winner, which resulted in a slower second half.

New keeper Max O’Leary was between the sticks, with Aaron Pierre and Ethan Ebanks-Landell in a back three and Donald Love and Ryan Giles making up the wing-backs.

Chelsea youngster Luke McCormick, who joined on loan this week, was in a three-man midfield also containing Brad Walker - the signing from Wrexham in January who was also making his Meadow bow.

Evergreen striker Steve Morison skippered the side. The Millwall frontman is on loan for Town for the season.

He partnered last season’s top scorer Fejiri Okenabirhie. Ro-Shaun Williams and Romain Vincelot were the other existing players to start.

New boy Daniel Udoh was on the bench, while new signing Joe Murphy is out with a broken foot.

There was no place for Dave Edwards, who is nearing a return from ankle surgery. He joins Ollie Norburn, Josh Laurent and Scott Golbourne in the treatment room.

Just as he had done in Villa’s first friendly of pre-season in Minnesota, Dean Smith named a different starting XI for each half.

The opening period allowed supporters to get a first glimpse of new boys Jota, Ezri Konsa and Frederic Guilbert.

It was the latter who experienced a particularly unsteady start, first being robbed by McCormick on the wing and then, moments later, outmuscled by Aaron Pierre, with the Shrewsbury full-back sending a low cross into the box which Tyrone Mings cleared.

Villa goalkeeper Jed Steer was called into his first action of the game soon after, getting down low to his left to palm away a free-kick struck well by the lively McCormick.

The hosts bright start continued when Pierre hooked a volley only a foot or so over the bar after Villa had failed to clear a free-kick.

Yet it was far from one-way traffic and the visitors, with John McGinn and Jota as driving forces, began to carve out several openings of their own.

Andre Green sent a shot into the arms of O’Leary from distance, before Ebanks-Landell was in the right place to deflect a goalbound Keinan Davis header over the bar after a quickly taken corner.

Pierre was similarly well placed to save the home side when Villa almost took the lead in comical circumstances.

A close range Jota volley, heading wide, was redirected toward goal by Romain Vincelot’s midriff with Pierre hacking clear before it crossed the line.

O’Leary, who had put in a fine display when playing for Bristol City at Villa Park back in April, then brilliantly denied Davis with a one-handed stop, tipping the striker’s close range drive over the bar after a driving run from Jota had put the home side on the back foot.

Having started the half well, Shrewsbury then finished it strongly.

Okenabirhie perhaps should have done better with a Love cross which he was only able to send over the bar.

A minute later, Ebanks-Landell really should have scored after arriving to meet a McCormick corner at the far post. But from five yards out, he placed the header over the bar.

Ricketts did not make any half-time changes, while Villa sent out an entirely different outfield team, including new £22million record signing Wesley.

O’Leary, 22, made his second top stop of the afternoon with a fine one-on-one save to deny Rushian Hepburn-Murphy as the visitors started the second period brightly.

Villa appealed to referee John Brooks for a spot-kick before the hour as Callum O’Hare went down under a dangled foot but the calls were waved away.

The hosts made their first change as Shaun Whalley replaced Okenabirhie, who had taken a little knock.

Town’s longest-serving player Whalley typically livened things up. He was inches from winning a penalty on the Villa penalty box line before rounding keeper Steer outside the box and being brought down, the keeper receiving a caution.

Rather out of nowhere the visitors edged ahead with 25 minutes left. A long goal kick dropped for Wesley and the Brazillian helped a lovely ball over to Hogan who kept his composure and finished cooly.

Brilliant defending from Ebanks-Landell, not for the first time, denied Villa a second after Wesley had rounded O’Leary and teed up O’Hare in the box.

Ricketts was happy for all of his Shrewsbury starting XI bar Okenabirhie to play for most of the match with the trip to Cheltenham on Tuesday night in mind.

Meadow debutant Love blasted miles over from distance before Hepburn-Murphy shot wildly off target for the visitors.

Ricketts sent Omar Beckles and former AFC Telford man Udoh on for a 10 minute run-out before more changes even later.

The number of changes slowed the game down as a contest. Conor Hourihane sent a well-struck free-kick a foot or so wide

Oswestry Town open up a gap at the top

‘Multiple people’ killed in shooting at US brewing giant