Warrick Fynn marked his return to the Shropshire side with a stunning bowling performance on the first day of the Unicorns Championship clash with Cornwall. 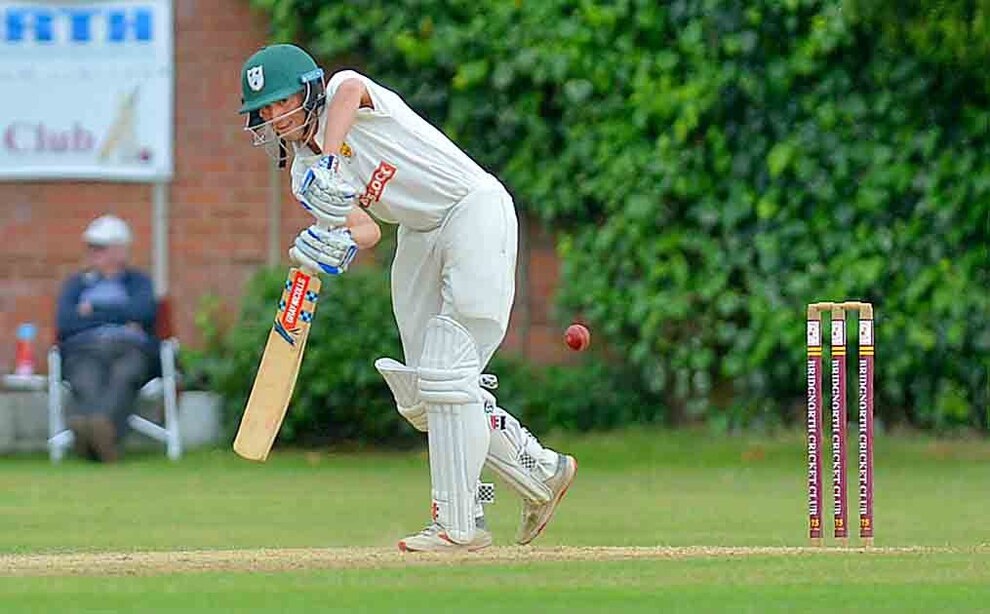 Xavie Clarke batting on his Shropshire debut against Cornwall Warrick Fynn hits out on his way to making 41

The Oswestry all-rounder was unavailable for the 273-run defeat to Oxfordshire at Banbury a fortnight ago.

And he showed just how much he was missed by taking 6-64 as the visitors were dismissed for 249 in just 63 overs at Bridgnorth.

By the close Shropshire were 179-6, 70 runs adrift with the Western Division clash evenly poised.

Shropshire were forced into a late reshuffle with Jack Twigger and Alex Phillips ruled out through injury and illness respectively.

In came Simon Gregory on his home ground and there was a debut for Shrewsbury's Tyler Ibbotson.

Cornwall opted to bat first after winning the toss and reached 25-0 before one explosive over from Roberts ensured that promising start was brought to a halt.

The breakthrough came when he had visiting skipper Scott Harvey caught behind by Gregory for 10.

And three balls later Jack Paull was heading back to the pavilion without scoring after he presented Will Parton with a diving catch at third slip.

After the initial seam success, it was the spin of Fynn and Ibbotson that had the visiting batsmen in trouble.

Opener Charlie Kent dug in defiantly and, joined by former Leicestershire all-rounder Tom Wells, they put on 98 for the fourth wicket.

It was Fynn who made the vital breakthrough, having Kent trapped before for 52 to leave Cornwall on 157-4.

Things got better for Shropshire the very next ball as Matthew Robins went for a golden duck, Alexei Kervezee taking the catch.

Christian Purchase made two and lasted just four balls before the Kervezee/Fynn combination struck again to reduce the visitors to 167-6.

Fynn was bowling in tandem with Ibbotson and it was the new-boy who claimed the key wicket of Wells for 87 by getting him caught and bowled.

It was 216-8 when Andrew Libby was bowled by Fynn for 11, although James Turpin was adding valuable late runs.

An expensive over of 16 saw Ibbotson withdrawn from the attack for Jack Edwards, and he removed Jonathan Ludlam for four with the second caught and bowled of the innings.

Turpin's late resistance was ended for 45, caught and bowled by Fynn, as Cornwall fell just short of reaching 250.

Shropshire's reply got off to a sticky start when Will Parton edged Wells behind to Harvey for one in just the second over.

Skipper Joe Carrasco has been in good form and he and debutant Xavie Clarke pushed the hosts on to 46 before Carrasco was trapped leg before by Ludlam for 23.

Oswestry team-mates Fynn and Clarke put on 54 for the third wicket before the latter fell for 34, caught by Paull off the bowling of Libby with the score on 110.

And things got worse in the next over without another run being added as Fynn's knock ended on 41, falling lbw to Smith, the first of three victims for the former Derbyshire and Essex all-rounder.

Ross Aucott was caught behind for nine and Shropshire were in trouble at 149-6 when Kervezee was trapped in front for 25.

Gregory and Edwards helped see the home side through to the close, but they will need their unbeaten partnership of 30 to continue if they hope to claim a first-innings advantage.